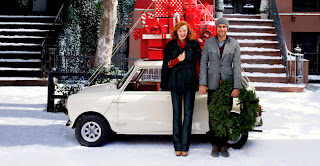 Happy Christmas/Hanukkah/holidays everyone! I'm all packed up and ready to board the flying kangaroo home to Oz, where for 2 weeks I get to play pirates with my nieces, swim in the ocean (hopefully) and catch up with old friends and family. My suitcase weighs a ton with all the godchildren gifts, but I am happy, happy happy because the anesthetist is coming home for the big family intro! Wish us luck and have a wonderful break. Until 2012!
Posted by Aussie New Yorker at 9:47 AM No comments: 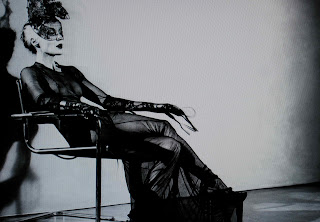 I must admit I have never been that "in" to Daphne Guinness. She's always been on my peripheral vision here in New York - tottering around on heel-less shoes at the same art exhibition as me,  dining at the same restaurant, getting ready for the Met gala in the window of Barney's - but I have never actively followed her exploits or had a fashion crush on her. I always dismissed her as some poor lost spoilt english heiress who was undernourished and overwrought and had nothing to do except try and look eccentric.
But recently, all that has changed. There's a "Daphne Air" at the moment. She has pervaded my space but in a good way.  It started with a fantastic article on her in the New Yorker, followed by a trip to the Fashion Institute Museum's exhibition of her wardrobe.  And after watching various videos about her, I actually think she is quite a fantastically (still) eccentric, interesting,  humorous-as-only-the-Brits-can-be and rare creature.  For those who are not intimately acquainted with her, here are some 101's:
Here is her tribute to Mcqueen that is showing at the FIT exhibition.

Posted by Aussie New Yorker at 9:55 PM No comments: 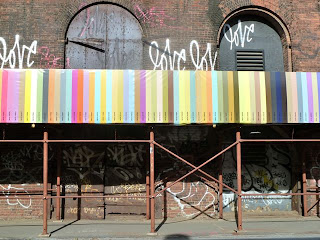 I took a girlfriend to Dumbo last weekend. It was her first time off Manhattan! There is always something interesting happening on the street over there. This installation was a remnant of the recent DUMBO Arts Festival. Alexsander Macasev has brought into the public sphere two years of his "chromatweets," swatches of color he picks at the end of each day to best represent his moods and feelings on that day then posted onto his nano blog. The title of each post is the hexadecimal code of each color. No words, no explanation, just a block of color. This daily visual representation compresses everything into one piece of information: color. You can see the blog here.
The project is currently 400 feet long and hugs a beautiful historic building. It looks like a glorious pms swatch sheet, as you see each daily "entry" next to each other and follow how the artist's mood changes over the days and months. His only rules? No black (000000) or white (FFFFFF)! 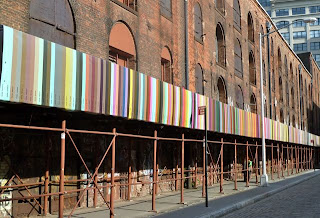 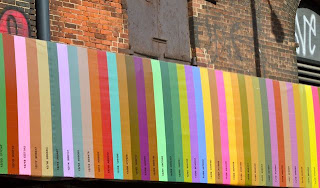 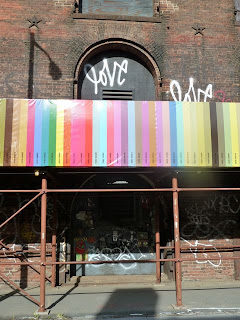 Posted by Aussie New Yorker at 10:11 PM No comments:

You may remember my post here about Jane Walentas' beautiful restoration of an old carousel she recovered in Ohio. When I wrote that post, it was still waiting for a home. Well, now it has one. And probably with one of the best views of Manhattan. Located in a beautiful, simple glass "box" in Brooklyn Bridge Park, Famed architect Jean Nouvel has designed a pavilion that will amaze adults while the kids delight in finally riding the restored ponies. 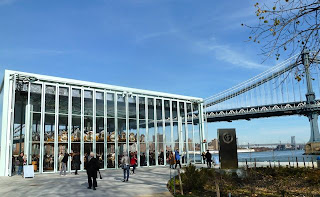 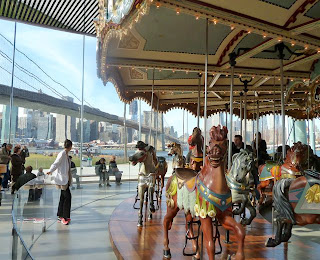 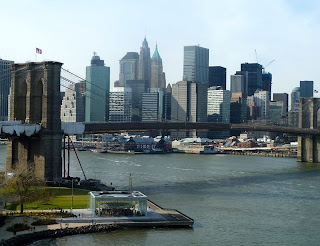 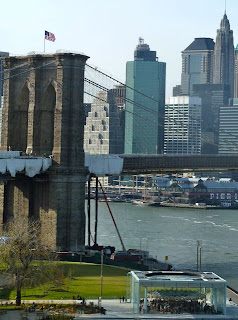 Posted by Aussie New Yorker at 5:00 PM No comments: 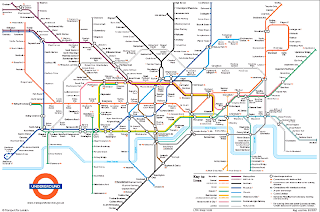 My last work trip this year before going home.
Posted by Aussie New Yorker at 11:00 AM No comments: