Jazz in the City 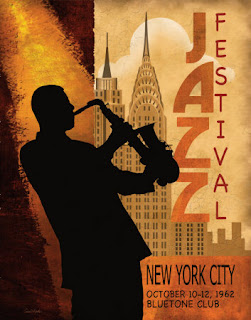 My partner took me to hear some jazz last night. He is in reality an anesthetist, but in his head he is actually a frustrated music producer one week and jazz saxophonist the next. Either way, he understands alot about jazz and decided to teach me, the heathen who thinks all jazz belongs in an elevator.

Of all the cities in which you could learn about jazz, New York is a pretty good start. All the greats have played or made their name here - Gillespie, Armstrong, Goodman, Davis, Parker - and the city has an abundance of history-laden, world-renowned jazz clubs. Blue Note is still here in the West Village, the Apollo Theatre is in Harlem and Birdland in the West 40's - although that has apparently become very pedestrian, catering to the Broadway tourist seekers (the anesthetist's summation, not mine).

New York has been the backdrop to many a film and novel involving jazz. When I think of jazz and the city, I think grainy black and white images of the East River and bridges, or the Empire State and Chrysler buildings rising up from the steam of the subways, cold, rainy nights, fedoras and trench coats, and a lot of cigarette smoke haze. So it was fitting that last night was freezing with cyclonic winds and enough rain to make you think you were better off swimming to the venue than taking a cab. I was being taken to the 'best' jazz club in New York, apparently, The Jazz Standard. It's your typical subterranean club environment with red velvet booths, low lighting and ceilings, and an intimate atmosphere. The only thing lacking from my idea of jazz purity was the absence of smoke, cool black dudes (you're allowed to use the word 'black' in this country. It's to risk offending a Puerto Rican by calling him Afro American) and fedoras. Jeans and white people seemed to be the order of the day. But when I mentioned this to the anesthetist he brushed it aside and said we were here for the music, not the people watching. 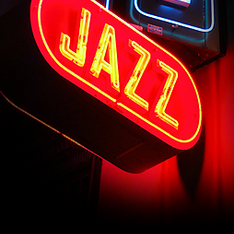 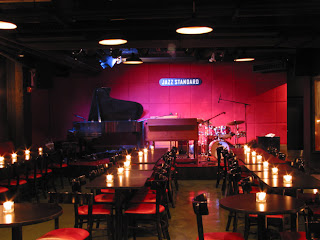 We were here to hear a young star called Ambrose Akinmusire, who has been hailed by the LA times as "...less like a rising star than one that was already at great heights just waiting to be discovered." As winner of the Theolonius Monk International Jazz competition, this 29 year old trumpeter, bandleader and composer is apparently poised to do great things. The fact that he is also incredibly good looking and has beautiful hands means in my mind, that he will go far. However, when I suggested this to the anesthetist, he gave me a look that suggested I should perhaps reserve these sort of comments for a fashion shoot and not a jazz performance. 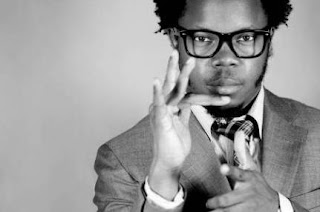 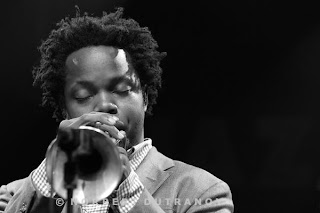 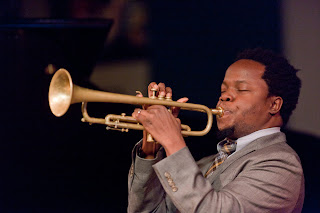 In terms of learning about jazz, Akinmusire was not a good starting point for novices. His music is complicated and stylistically clever. Its like trying to understand an essay rather than enjoying a piece of prose. But he is captivating to watch when he plays. As the anesthetist explained to me, with the classic, traditional jazz of Miles Davis, the steady beat of the drums and bass "walk" the piece along, while Davis "flies" over the top with his trumpet playing. It's easy listening. With Akinmusire, there is no easy, linear direction. You lurch and stop and swerve and rise and fly before landing, with a exhausted sense of achievement. I guess at least you feel like you experienced something amazing even if you don't quite understand what that thing was.