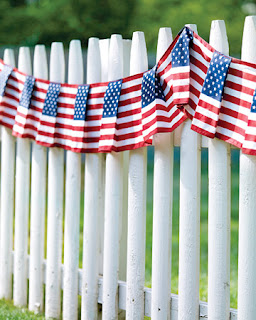 There's going to be a lot of red, white and blue this weekend. And why not! It's one of the biggest holidays on the American calendar, as we celebrate this country's independence from the Brits in 1776. Isn't it funny to think that at that time in Australia, we were only beginning to forge a link with the Brits.
Anyway, patriotism hits an all time high this weekend.  There will be plenty of flags and stars and stripes and fireworks. I will be enjoying all this from the deck of the anesthetist's yacht. And maybe, just maybe, I can get him to muster up enough love for his adopted country to fly the star spangled banner alongside his Sth African flag!