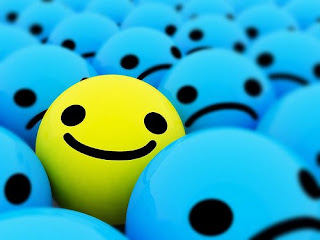 I'm not sure how that plays out nationally. I'm guessing New Yorkers' upbeat outlook is substantially higher than say those who live in Detroit or Baton Rouge, mainly because the economy here has shown some potential for growth. But I think it does mirror how outsiders see Americans, as a tirelessly upbeat, happy, positive nation of people.

I have always been intrigued by this global perception. Is it true or is it a facade?  In Australia, we grew up with images of American corporate employees pumping the air with their fists in a joint show of success and solidarity, sportsmen high-fiving in the winners circle and a plethora of American self help books offering us suggestions on how to "be your personal best," "beat the blues" and "win friends and influence people".  Of course, America is also the home of the motivational speaker, the celebrity minister and positive affirmations. And I don't deride any of this, because like many others, I do believe that great things come to those who are optimistic and that negativity attracts more negativity.  But I also believe in the yin and yang theory; you can't only have one thing. For every positive, there is a negative, every up, a down.  So like with alot of generalizations, I did not believe Americans could always be "up" - until I lived here.

Coming from a country that is cynical of anything that smells vaguely of corporate brainwashing, it was really disconcerting to work in an environment where everyone really IS positive and optimistic all the time. The first thing the cynic thinks is "oh, this person is not sincere, they're nice to your face and back stab you afterwards". But trust me when I say that every American I have met or worked with - and they're not all from New York -  truly wants you to "have a nice day," makes sure "you are very welcome" and will go out of their way to help you. And they really believe tomorrow will be a great if not better day than today. I must admit it's been hard not to get swept up in this wave of ebullient enthusiasm for life. And in a funny way, I really like it! It makes you feel good about everything you are and do.

Of course, there are the disbelievers of all this "false" optimism. Barbara Ehrenreich is one such realist. She wrote a book called "Bright-Sided; How the Relentless Promotion of Positive Thinking has Undermined America". Ehrenreich argues that Americans are a cheerful, optimistic, and upbeat people because this is their reputation as well as their self-image. However, more than being a temperament, this positivity is seen as the key to success and prosperity because they are relentlessly told that it is. She then goes on to knock this down with an urgent call for a new commitment to realism, because in her opinion, this irrational optimism has led to disaster.

It's a fascinating read, particularly for a non-American like myself. And there are a lot of reasons to totally agree with Ehrenreich. If you are interested, there is an excellent review of her book here. But for me now in this moment, I will just remain content to live in such an optimistic city like New York.