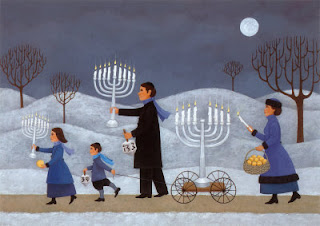 The annual Jewish Festival of Lights, also know as Hanukkah or Chanukah, begins tonight. Being the "goy" that I am, this holiday bears no relevance whatsoever to my life. However, given I live in one of the most highly populated Jewish cities in the world and work for a Jewish company, I thought it was in my best interest to at least know a little bit about it. So here goes:

Around 200 BC, the Jewish people in Jerusalem were living under Egyptian rule but were free to worship as they pleased. In 175 BC, Antiochus IV Epiphanes took the Syrian throne, invaded Egypt and desecrated Jerusalem. 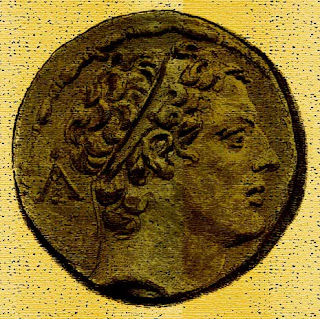 He outlawed Judaism and forced the Jews to worship Greek gods, banning all Jewish rituals upon threat of death. In 168 BC, he seized the holy Jewish Temple in Jerusalem and dedicated it to the Greek God Zeus. Mattathias, a Jewish priest and his five sons led a revolt against the Syrian army. Lasting three years, they emerged victorious,  recaptured Jerusalem and liberated the holy temple. 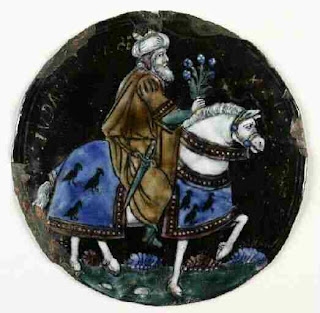 Judah Maccabe
According to the Talmud, the high priests ordered the lighting of the menorah, the eternal flame, to re-dedicate the desecrated temple to the glory of God. However, they found the Syrians had defiled the olive oil required to keep the menorah burning. All they found was one small jar - enough to light the menorah for 1 day. Miraculously, the menorah burned on for eight nights, giving the priests enough time to find more oil. An eight day festival was declared by the Jewish priests to commemorate this miracle and today the menorah is a symbol of the indomitable faith of the Jewish people. 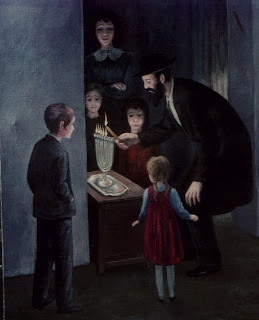 The current menorah holds nine candles, with the centre candle used to light the other eight over eight consecutive nights. However, typically it is a seven branched candelabra and has been the symbol of Judaism for over 3000 years and is the emblem of Israel. The Jewish Museum in New York has an amazing collection of menorahs throughout the centuries, ranging from a 16th century Italian lamp to Richard Meir's interpretation in 1935. 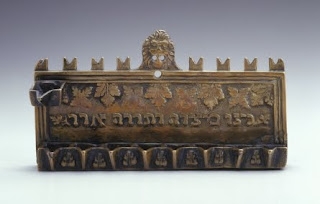 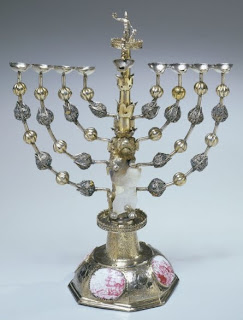 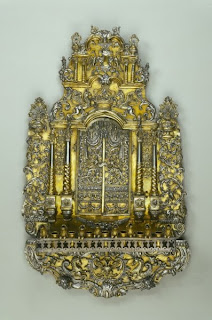 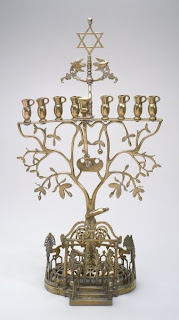 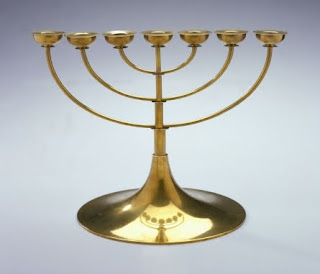 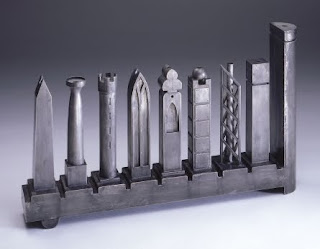 Richard Meir, 1935
The world's largest menorah is erected each year on Fifth Avenue opposite the Plaza. It is so large it is lit each night with cherry pickers. 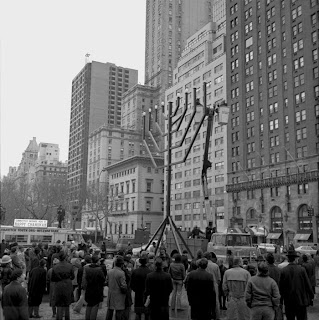 Finally, Hanukkah would not be complete without dreidels or spinning tops. These wooden toys have a hebrew letter on each of the four sides which together form the acronym for "a great miracle happened here". It is thought the dreidel began during the reign of Antiochus, when the Jews gathered together in secret to study the torah. If soldiers arrived, the Jews could pretend to be gambling. Today it's a game played by the kids during the Hanukkah celebration. 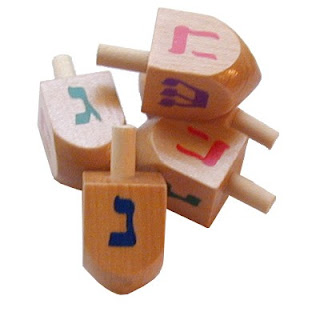 I'm not sure I'm ready to give up Santa Claus and my Christmas tree yet,  but I am happy to now understand a little more about the eight-flame candelabra that sits on reception at work.
Images: liverputty, bible-history.com, haifa-israel.co, nycgov.parks, jewish museum, all things jewish
Posted by Aussie New Yorker at 10:24 PM