When it Snows it Pours 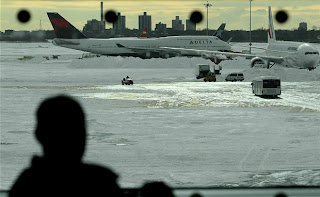 OK, I know I continually say I love it when it snows in New York, but maybe not when it involves air travel.
I was supposed to leave for Barcelona last Wednesday night. But after Delta and Continental cancelled their flights due to a pending snowstorm, we wondered what American was going to do. Pigheadedly, they continued to say everything was ok. So off we traipsed to JFK for an 8:50pm flight.
After sitting in the plane on the tarmac for 2 hours waiting for the ice and sleet to turn to snow (who knew), then waiting another 30 minutes while the plane was de-iced (another learning for me), we slowly taxied to the runway. By this time it was snowing so heavily I could not see out the window and wondered who on earth the pilot thought he was. A Kamikaze fighter pilot? But then his voice came over the PA in that calm, assured, American pilot I-Am-Concerned-About-Your-Safety voice saying, "Well ladies and gentlemen, I am afraid there is already snow piling on the wings (really?) So we will have to go back to our gate and try again tomorrow."
That left a plane full of very sleepy and unhappy passengers tumbling back out into the departure lounge in all sorts of unattractive plane sleepwear, only to have to wait another 40 minutes before they told us our luggage could not be taken off the plane as the door to the hold had iced over!
Try getting back to Manhattan in the middle of the night, when the roads are so icy and laden with snow that only the bravest cabbie would be seen dead at the airport. 150 passengers and 5 yellow cabs? Recipe for disaster.  Airport hotels full? There is only one solution. Hail an illegal minivan cab, pay an extortionate price per head and place your own life along with 5 others into the hands of two black dudes from the Bronx.
Therein followed a hilarious if not terrifying 3 hour snail's pace trip back to the city. Have you seen the movie The Road? That's what the Long Island Expressway looked like. A scene from a post apocalyptic nightmare. 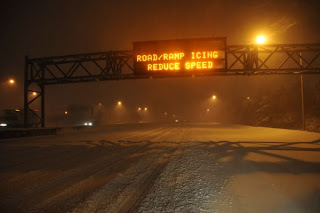 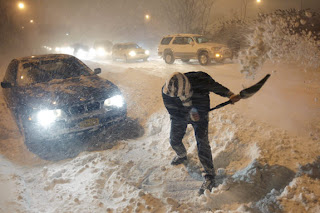 Cars were abandoned along the sides of the highway, already invisible to the naked eye except for snowy mounds dotted along the way. Lone figures dressed in black suddenly appeared in the middle of the road, heading for God knows where. Trucks were reversing and turning in the middle of the highway only to drive back down the road the wrong way to find a better route. All street signs were so covered in snow that drivers did not know which turn to make. Our windscreen wipers kept icing over and the heating/air con didn't work, so our windows were open to clear the windscreen and freeze our bodies. The snow was coming down so heavily, it was impossible to differentiate the road from the dividing walls or the trees or sidestreet stores. All this just for a work trip!
Miraculously, we slithered our way into Manhattan after 3am only to find just as much snow and an eerie yellow light over everything. 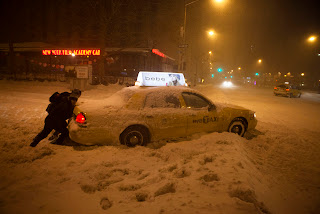 Thursday dawned grey and uninviting. Central Park had seen 18 inches of snow. That night we turned around and made our way out to JFK again. This time our plane took off and we finally made it to sunny Barcelona.
images: telegraph, james carbone, new york daily news, dan nguyen
Posted by Aussie New Yorker at 9:40 PM