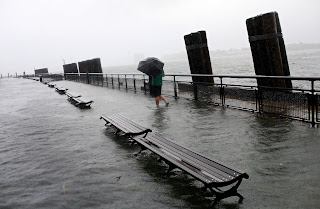 Well, I never made it out of New York on Saturday. And Irene wasn't as bad as CNN made it out to be. A bit of flooding along Battery Park, a few tree limbs down and alot of closures and cancellations for a normal storm-level wind.

Well, ok. Maybe it was a little more serious than that, but it was all still underwhelming by the time Irene made its way to New York.  The grocery stores made a killing though. Try getting bread at 3pm on Saturday! And the city must have trucked  in the earth's whole water table. People were stocking up as if it were Armageddon! Meanwhile, I have spent the weekend trying to get on another flight to Shanghai. Wish me luck. The backlog is extraordinary. Who knew so many people wanted to visit China!