A Call to Alms 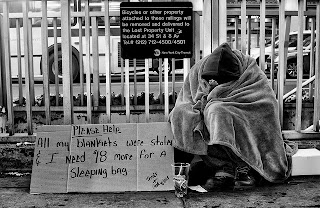 I got back from my corporate bootcamp on Friday. The intense week made me aware of a lot of things both personally and professionally. One was how absence makes the vision grow more acute.  When you live in Manhattan, you grow accustomed to all the panhandlers because you live with them every day. But after spending five days in the peaceful green surrounds of a hallowed tertiary centre of learning, suddenly the picture back here is not so rosy.

Have you ever wondered, if you were suddenly out on the street with nothing, no friends, family, credit line or bed, how would you ask strangers for money? I have thought about this. Often. Have you ever considered the myriad of variations open to you? Do you simply ask? Sit with a sign? Sing and dance? Which one is the most effective? Or are they all dependent on the type of stranger you are asking? The time of day? The location? I'm sure most of these people don't apply such rigorous thinking to their actions to get food or shelter or a cigarette or even a drink. But from the giver's perspective, maybe we have to think about it and weigh up who we think needs our money the most or deserves it the most, because unless you are Gandhi, most people can't offer alms to every single person that asks them every single day. Or can we and should we? But believe me, in this city, there are alot.

Below is a typical selection of panhandlers you may encounter in Manhattan from the time you leave your apartment for work to when you return after dinner or a Broadway show. You decide who you would give your money to:


This is a real day here that any New Yorker could share with you. And each person has a compelling story I'm sure. Mayor Bloomberg says the panhandling situation is "under control" and in fact better than it used to be. He argues there are less people asking for money in the subway. While that may be true, there are now more people asking at the entrances. So, which of these people are you going to help today? Or are you going to ignore or step over/ away from each one and let "someone else" help them out? Or will you send your money to an NGO like NYCCAH to make sure it is "spent wisely" and distributed "fairly"? This choice is all of ours. And it's a really difficult choice.

So glad I stumbled across this blog. I LOVE New York, but funnily enough I've never been there, hope to one day though. In the meantime, I can read this blog.