Snakes and Ladders without the snakes 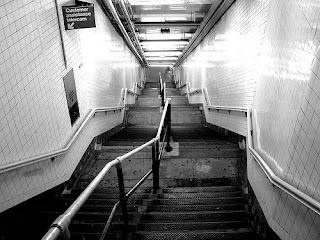 Ok. I have been living in this city for nearly five years now - when do I become considered a New Yorker? - and I think half of that time has been spent underground, lost in the subway system.  If you use the subway in New York - and you would be crazy not to  at $2.25 a ride - one of the most monotonous, stultifying parts of every day is repeatedly climbing in and out of it. Like a mole, blindly digging. Up, down, up, down and down even further, before coming up, up and up even more. And don't be fooled into thinking those escalators beside the stairs work!

I calculated that I ascend/ descend 132 stairs a day just to get to and from work. That's 660 stairs a week, before taking into account going out at night, shopping on weekends and everything in between. And then maybe subtract a few for when you slip on the icy snow in winter at the top of the stairs and land with a thud at the bottom without having touched any steps in between.

I should be happy about all this. I like to think it's adding strength and shape to my legs and butt and giving me the workout I can't be bothered to do. It certainly beats using Stairmaster at the gym. But I think all it's really doing is adding varicose veins, breaking heels and inducing sore calf muscles. And pushing me further into the mire of close city living. The fetid smells of human lives swirl underground with no circulation of the putrid air.  And I'm sure it's not hygienic to have your face pushed into the rear end of a fellow stair climber ahead of you while someone behind you has their face pushed into yours. And as for summer, fuggedaboutit. Temperatures soar down there. It's hotter than a bikram yoga session and with far more sweaty bodies crushed against you. As temperatures hover around 35 degrees Celsius up top, down in the subway make that closer to 40 degrees. I have seen plenty of people faint, start reeling with dehydration and end up sitting on the disgustingly filthy steps some 200 metres underground.

And yet, we all continue to use it. In fact, on average, more than 5.2 million people use it on a week day according to the MTA figures. Out of necessity? Boredom? For a jolly? Because it is still the easiest, fastest and most economical way to get around Manhattan and the four other boroughs of New York. And it works in its oddly disjointed, humid, crowded way. But I still miss my car.......