Sweat, Steam and Soaking in the East Village 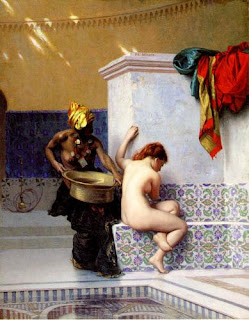 The Anesthetist took me to experience a true New York icon this week because apparently I've been uptight and belligerent. He marched me to the Russian & Turkish Baths in the East Village so a fat Russian could whip me with oak leaves and put me back in my place. It worked. You don't mess with those men. In fact, you don't really mess with anyone in there it's so crazy.

These baths have been serving the New York community since 1892 and to be honest, the interior looks like it. Not that it's dirty, but it certainly ain't no Four Seasons spa experience either. For $35, you can spend all day in there if you feel the need. There's a sauna, a steam room, an ice-cold dipping pool, an impossibly hot Russian room with 20,000lb of rock cooked overnight to make you think you have arrived at the centre of the earth, and a lot of nude bodies of all shapes, colors and sizes.

The Anesthetist took me on the mens'a and women's night so he could ladle more and more hot water over the rocks in the sauna until I was begging for mercy from the heat. His answer was to add a few drops of lemongrass oil and more water. We then moved to the Russian room draped in very unsexy pantaloons and drab brown towels. There I experienced my very first platza oak leaf whipping. I'm sure my whipper was a retired Russian Olympic weightlifter. But it certainly made my skin feel wonderfully soft afterwards.

These Baths are a must-do when visiting New York, if only for the people watching. You get members of the American Ballet there, contorting into positions deemed impossible. Then there are the mafiosa types from Brooklyn who sit huddled together in corners, the models unwinding during fashion week, the Turks drinking mint tea on the roof deck and every other type of two-legged New York inhabitant who wants to relax, show some skin and steam out those pores.

When you look at the paintings depicting hamans, they were much more beautiful than my one on East 10th St. But if you close your eyes and breath in the steam, you can almost see the minarets and hear the calls to prayer that so remind us of where this group bathing came from . 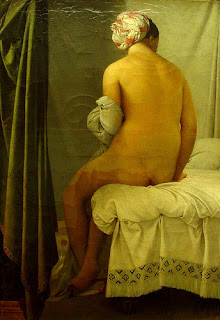 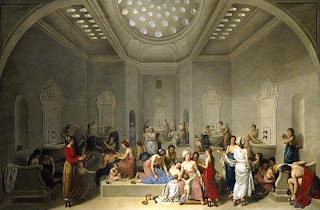 I'm hooked on Korean baths - you lie like a fish on a slab while a little lady in her underwear scrubs you extremely thoroughly and laughs about you in Korean. You then fall asleep on a hot stone floor - and it's marvellous.