I have always been a Rothko fan, but without constructive or intellectual reason. I just love his use of primary colors, his interjection with black and his seeming simplicity of form-vertical or horizontal strokes.

Tonight, I learnt a whole new side to this man and I love him even more. I have just got back from the West End production of 'Red' now on Broadway, with Alfred Molina as Rothko and Eddie Redmayne as Ken, his ever suffering assistant. It is through Rothko's masterclass with Ken that the audience really learns about the meaning of the black in his paintings and the eternal struggle of an artist to admonish both critic and fan, but also to be emotionally and financially dependent upon them.

Molina dominates the stage as the towering, barrel-chested monolith that Rothko was. Last time I saw Molina was on celluloid as Diego Rivera, another hulk of a man, in "Frida". Kind of interesting that he now plays another conflicted artist. 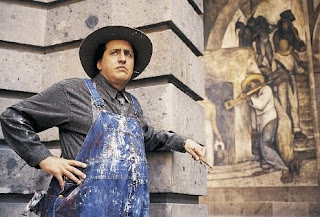 The play "Red" is set in 1958 at a defining moment in Rothko's career, when he was asked to paint a series of murals for the now iconic New York restaurant The Four Seasons (not to be confused with the hotel chain). It was to built in the new Seagram Building, designed by architectural titans Philip Johnson and Mies Van Der Rohe. 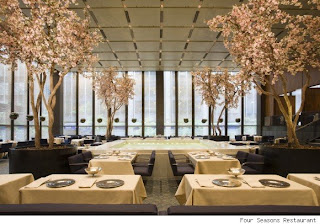 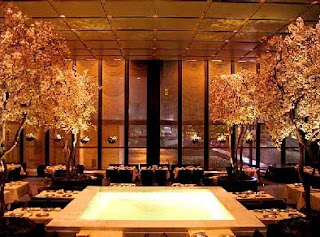 The commission was one of the highest for the day and certainly the largest Rothko had been offered. However, he was under the impression that his murals would be displayed in the lobby, not the restaurant. When he went there to dine once it was finished and saw the type of person who patronized it - rich and clever "monkeys" and jackals" who were more interested in discussing business and what was on their plate rather than on the walls - he threw the commission back at the architects. This was after completing all 40 canvases. "I hope to paint something that will ruin the appetite of every son of a bitch that eats in that room". 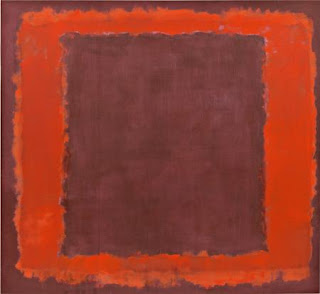 Ultimately he donated 9 of the works to the Tate in London in 1969, a year before the black swallowed the red in his life and he committed suicide.
Apart from being mesmerized by the fractious, arrogant, insecure but brilliant artist that Molina brings alive on stage, you become involved in the creation of Rothko's art itself. Paint is mixed on stage, canvases stretched and prepped, brushes and rags collected, and all this energy being played out against a blaring background of intense classical music. In one electric scene, both artist and lackey attack a canvas in tandem, saturating it from top to bottom in red - or scarlet, or crimson or plum-mulberry-magenta-burgundy-salmon-carmine-carnelian-coral - "anything but red!" as Rothko rages in a heated moment. This two minute explosion of activity exhilarates the audience and surrounds them with the passion of the artist.
I have not been exhilarated like tonight by a piece of theatre for a long time. If you are in New York before end June, I implore you to get tickets - if you can. If not and you happen to be in Moscow, 13 of Rothko's works including his monumental studies for the Seagram Murals are on display at Dasha Zhukova's Garage Centre for Contemporary Culture. This is the first time a Rothko exhibition has been mounted in Moscow, a lifetime after this Russian Jew fled his homeland with his family in 1913.