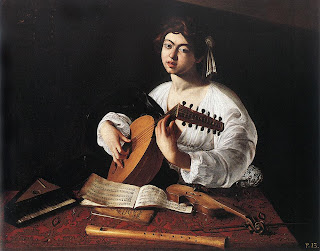 The Lute Player, Caravaggio
I went to a lovely lute recital on Sunday up in Harlem. I can't say I've ever really been a big lute fan, but after listening to recordings recently by lutenist extraordinaire Paul O'Dette, it seemed to be a sign when I saw a flyer promoting his concert in a church on West 121st Street.

O'Dette has been described as "the clearest case of genius to touch his instrument'" (Toronto Globe and  Mail) and certainly his fingers made the lute sing. The whole experience started me thinking about the history of the lute and how ubiquitous in has been in art, politics and everything in between.

The European instrument we know today derives both its name and form from the Arab instrument known as al 'Ud, which literally means 'the wood'. The Arab 'Ud was introduced into Europe by the Moors during their long occupation of Spain (711 - 1492), where it was played in the court of the Andalusian Emir. 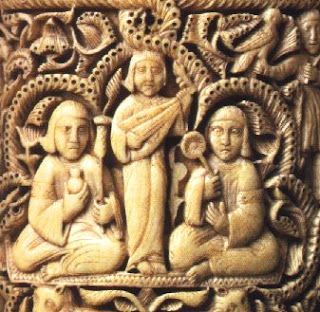 Ivory Box, Louvre Paris
Since then it has spent centuries in the great courts of the world, appeared in art from Syria to Italy and beyond, had verse and subsequently songs written about it,  accompanied velvet-clad and buckle-shoed dancers and been played by gods and angels. In fact, Orpheus was never without his lute - sometimes lyre, but usually lute - and Masaccio's cherubs strummed gently to the Virgin and Child. 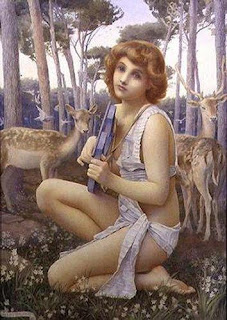 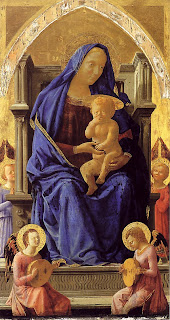 Virgin and Child, Masaccio
During the Renaissance, the lute became the most prized instrument of the day and those who composed for or played the lute were considered rock stars. According to O'Dette, during the first half of the 16th century, three lutenists in particular were thought to be the living equivalents of Orpheus - Marco dall'Aquila, Francesco da Milano and Alberto Ripa da Mantova. They tended to play their own music which is still available today. Apparently Alberto was "headhunted" by the Ambassador of France  to come and play in King Francois I court. He was so highly revered that he was the second highest paid court member after the minister of defense!
Throughout history, the lute has been rich in symbolism. In the hands of angels it has represented the beauty of heaven, but in the hands of man, it has symbolised discord and division through a broken string (see Holbein's Ambassadors) or lasciviousness and scandal. 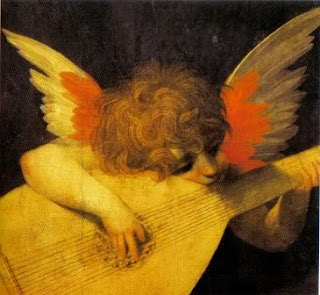 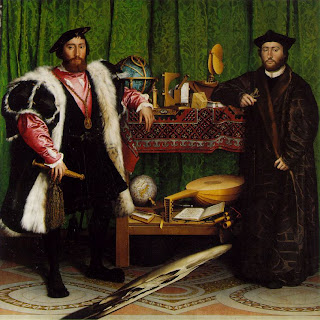 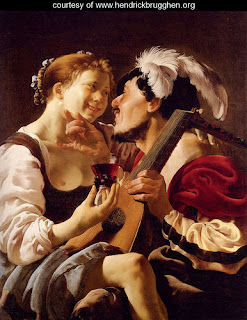 A luteplayer carousing wtih a woman holding a roemer, Terbrugghen
Today the lute has waned in favor, but luckily O'Dette is keeping the music and instrument alive. I will leave you with him playing a piece by Alberto Ripa da Mantova.