The month of May heralds spring and all things new. It also heralds the beginning of sticky beak time for those who love getting behind the closed doors of the 1% in this world! Between now and the end of July, houses and gardens from Manhattan to Maryland, will throw open their doors and gates to the 99% - for a fee. But don't be deterred by this. Now is the time to peek inside some magnificent architectural gems and wander through some dreamy gardens, in search of inspiration for your own little patch. And take heart in the fact that most of the fees charged for these tours are going to some worthy charity. Here are a few of the places I would love to visit.

Petra Island
Any one can visit Frank Lloyd Wright's Falling Water in Pennsylvania, but what about a residential home he designed on Petra Island? Originally designed in 1950 for the previous owners of the island, this house wasn't built until 2005, when it took 4 years to construct. The current owner, a rabid Wright fan, secured permission  from the Wright institute for the house to be built and it now stands exactly where it was originally intended. It even comes with a helipad!
putnamsecretgardentour.com 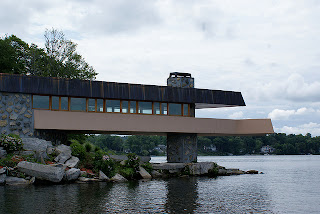 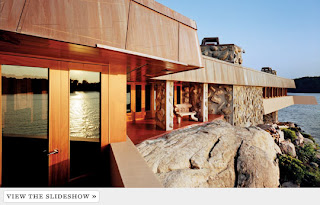 Greenwich Village, Manhattan
Who doesn't want to get inside all those glorious brownstones near me? Home to SJP of Sex and the City fame, amongst other celebs, this tour includes 7 houses including Gertrude Vanderbilt Whitney's former studio.
http://www.gvshp.org/_gvshp/events/tour-main.htm 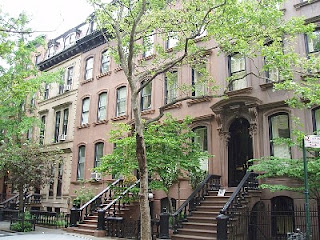 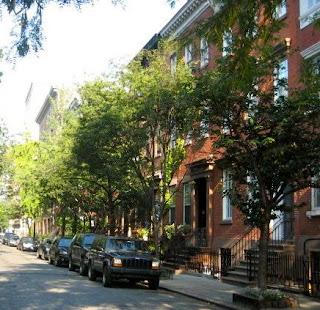 Connecticut
Who isn't a fan of designer Bunny Williams? She has written so many books and appears to have so many homes! But her passion is her Greek revival home in Connecticut, which she generously opens to the public once a year. It is surrounded by acres of wonderfully landscaped gardens. If you fall in love with it, you can buy her book. tradesecretsct.com 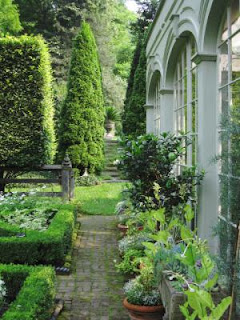 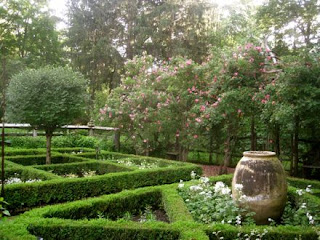 New Jersey
It would appear the much maligned New Jersey has more to offer us than just that terrible show the Jersey Shore. For the first time, the historic Glynallan Castle will be open to the public this month. It is modelled after the English castle Compton Wynnyates, apparently a favorite of the British royal family, and is listed on the National Register of Historic Places.
http://mansioninmay.org/ 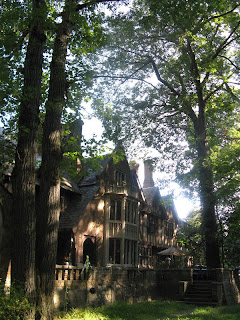 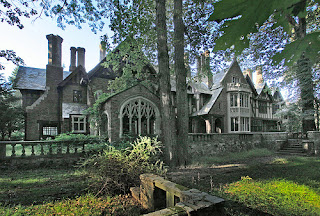 Posted by Aussie New Yorker at 7:13 AM No comments: 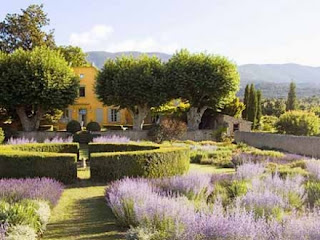 In Provence for a few days to eat, explore and relax. Staying at this heavenly place above! More pics upon my return. 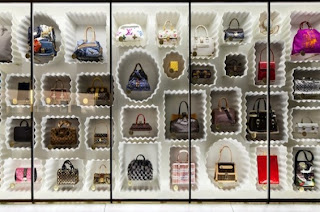 Back in the beautiful Paris for a few days. Off to see the Louis Vuitton Marc Jacobs exhibition! 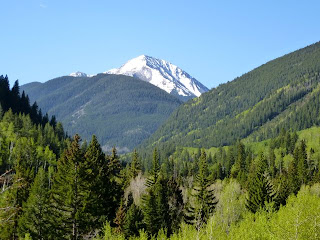 I went to Aspen Colorado for a few days, to do a site visit. All my Aussie ski friends have raved about this mountain town; the thick, white powder, the long ski runs, the apres-ski life, the beautiful Rocky mountains. I was excited to be going,  even if it was in spring and not winter.

Sitting at 10,000 feet, the town itself for me was hit and miss, like alot of American towns. It lacked the charm of a European ski village or even an Aussie one which offers the snow gums. But it is actually much more than a resort town. The city was founded in the late 1800s during the Colorado silver mining boom. It was named Aspen after the Aspen trees that cover the area (think silver birch to look at). Today, it is not only a celebrity hotbed in winter, but has a year-round population of over 6000 and offers a host of cultural activities including literary, dance and music festivals and is home to the famous Aspen Institute. 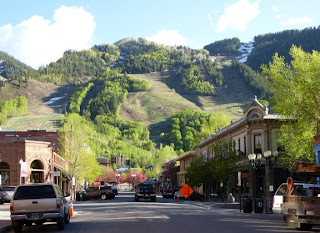 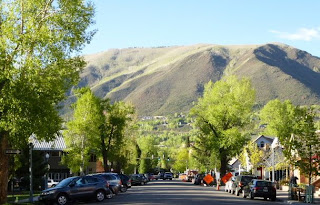 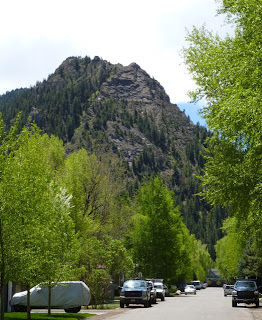 The beauty really begins when you get out of the town. It is breathtaking. The mountains are majestic and the air was crisp and clear and beautiful to inhale. People travel here from all over the world to hunt, hike and fly fish in summer. Even though spring had not broken everywhere in the valley, the sense of space and size and beauty  hit you every time you go around another wind on the road. 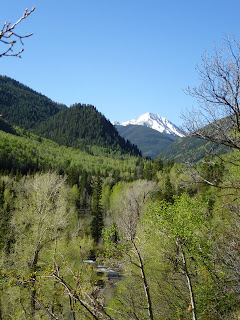 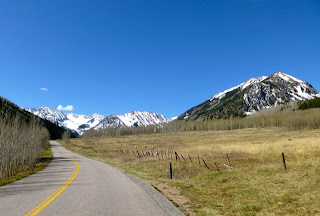 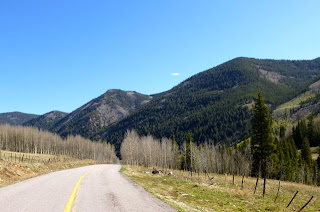 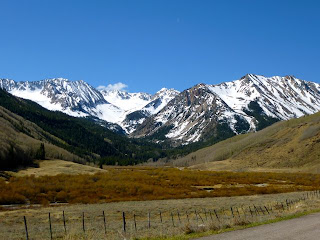 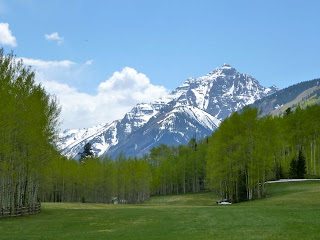 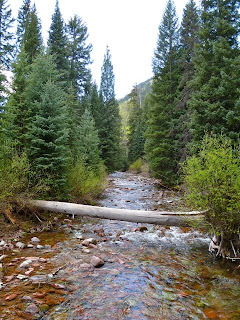 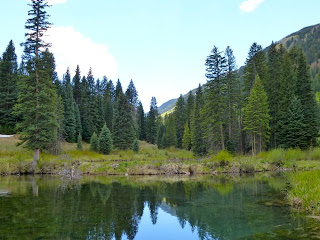 Posted by Aussie New Yorker at 9:56 PM No comments: 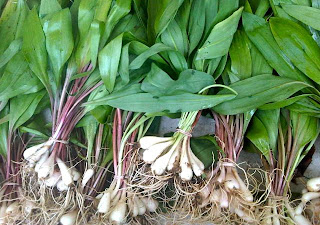 For those of you who have no idea what I'm talking about, don't panic. I only became acquainted with Ramps last spring when I saw a gazillion people at the Union Square farmers market hovering over a teeny table full of green, leafy things. They are in fact wild leeks that have a very short early-spring season and grow from Georgia to Quebec. They have a very pungent onion smell and are wonderful sauteed with butter and mushrooms or eaten raw in salads. And they are so pretty! White bulbs, a dark purple stem and deep green, succulent leaves. Restaurants all over the city suddenly have salads and mains incorporating Ramps and you have to take advantage quickly because they disappear as fast as they came.

The only problem is because they are wild, you cannot replant them. The growing interest in wild and locally-foraged plants has led to environmentalists complaining that our over-indulgence of this delicious wild leek has damaged the local Ramp populations, which in turn could harm the environment. Ramps only grow in damp areas, usually close to running water, so they must have some natural purpose. But with the rate that farmers are harvesting them during spring, there is a concern that the natural patches are dying out. Quebec and areas of North Carolina and Tennessee have banned harvesting them. Here, closer to Manhattan, conservationists are urging farmers to harvest sustainably. The point is, Ramps have been a part of cooking here for the past 300 years. Let's make sure we have them for another 300. So enjoy them, but don't hoard them. 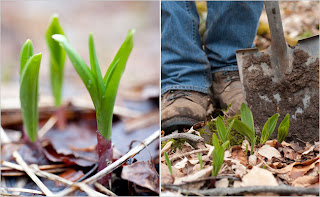 Jennifer May for the New York Times

Posted by Aussie New Yorker at 3:51 PM No comments:

It's Mexican Day here today. Well, to be more precise, the Mexicans - and everyone else for that matter - are celebrating Cinco de Mayo, a highly revered date on the Mexican calendar as it commemorates the unlikely defeat of the French army in Puebla, Mexico in 1862. This victory became a symbol of unity and identity for Mexicans. But the fact that this victory was short lived and the French captured Mexico City and installed Maximilian I as Emperor shortly thereafter, is not really spoken about! For today, it's all about nationwide fiestas, margaritas, mariachi bands on every corner, tacos and brightly colored sombreros.

Interestingly, south of the border Cinco de Mayo is not celebrated like it is in the US. Here, it has taken on a life of its own and become one gigantic national party. In Puebla, the festivities take on a more reflective and reverential perspective. And this year's celebration holds particular importance because it marks the 150th anniversary. Not to worry. In Manhattan, a city that is basically the Mexicans' third home after LA, everyone is happy there is a party in their honor. Given that so many Mexican immigrants - legal or illegal -  have basically brought up the next generation of Upper Eastsiders, and are responsible for every menial task possible in this city from washing restaurant plates to maintaining the perfectly manicured Hamptons' gardens, it only seems fitting that everyone stands by their side and celebrates in memory of this seemingly special day for them.  Pass me another margarita. Feliz Cinco de Mayo.