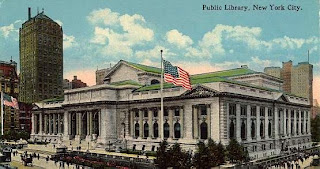 It has taken me over two years to finally visit the New York Public Library. Standing majestically on 5th Avenue near 42nd St, it was built on the site of the Croton Reservoir which provided New York City's water needs in the late 19th century. (Can you imagine having a reservoir in the middle of a city?!) 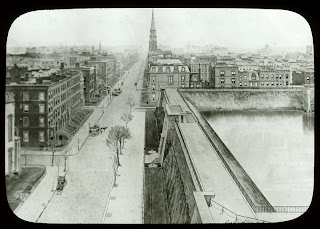 The Library took 12 years to construct, from 1899 - 1911 and was considered the apogee of Beaux-Arts design, apparently costing US$9 million. It contains 530,000 cubic feet of white Vermont marble, the then largest marble structure ever attempted in the US, and 125 miles of shelving. Third in size to only the Library of Congress and the British Library, it opened with an inventory of one million items. Today, counting all of its branches, the library contains a total of 20 million books and 50 million catalogued items, a lot of which are stored neatly in a whopping seven levels of underground shelving beneath the main building. 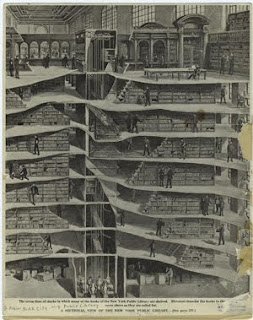 (image of storage levels in 1911)
Apparently the system used in order to request a book was considered very avant garde for its day. Librarians sent a person's request on a rolled up piece of paper, down a copper pipe which landed on the appropriate level below. There, a diligent worker sourced the item and sent it up as swiftly as possible to the waiting visitor, via a book lift.
The reading rooms are spread out over 3 levels and the sheer scale of the building is awesome. 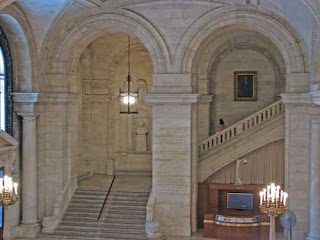 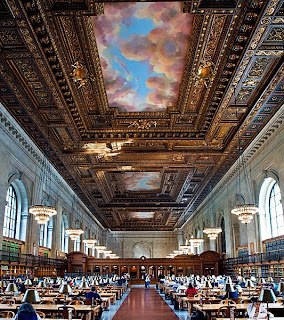 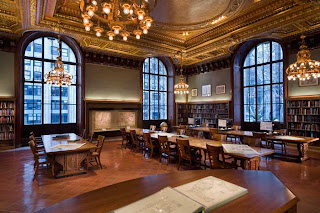 
Back on the outside, 2 magnificent stone lions guard the entrance. Originally named Leo Astor and Leo Lenox in honor of the library's founders, they were nicknamed Patience and Fortitude by Mayor Fiorello La Guardia in the 1930s, because he felt these were the two qualities New York citizens needed to get through the Great Depression. 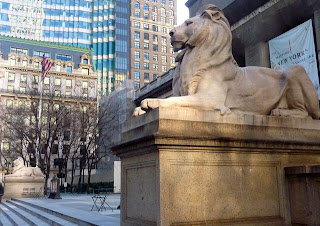 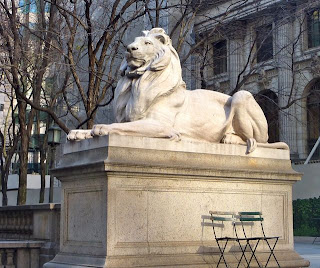 These lions always remind me of a gorgeous children's book called "Library Lion".  It's not set in this particular library, but I am sure Patience and Fortitude were the inspiration for this story of a lion coming to work every day in a public library, helping to dust the books with its tail, acting as a sofa for the children during reading hour and roaring for help when the librarian breaks her arm. 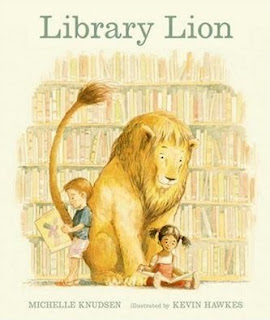 Today the library is probably best known as the backdrop for Carrie's wedding to Mr Big in the Sex and the City movie.   Mr Big pulls a spectacular no-show and Carrie's three darling friends show what real friendship is all about when they get Carrie out of the library as swiftly as possible. 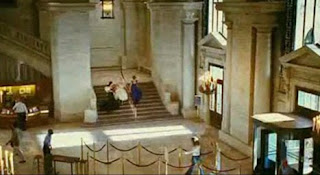 But aside from popular culture, the Library contains some extraordinary pieces that I read about recently, as the city prepares for the venerable institution's centenary. It houses one of the only 48 remaining Gutenberg bibles, printed in 1455. Purchased by Lenox in 1847, it was the first Gutenberg bible to cross the Atlantic. When it arrived in New York, the officers at the customs house were instructed to remove their hats upon seeing it, such was the gravity of the occasion. 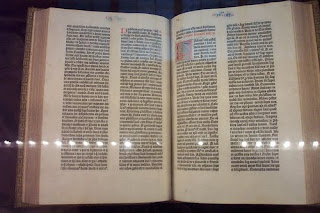 The library also has 40,000 restaurant menus, the world's largest collection, dating from the 1850s to the present. The one below outlines Thanksgiving dinner at the Plaza Hotel in 1899. Note the turtle soup and boiled turkey with oyster sauce! 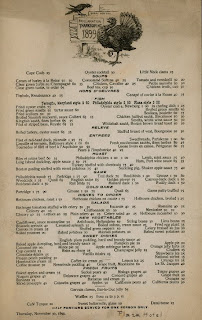 There is a letter that the dying John Keats wrote to his dearest friend Fanny Brawne in 1820. 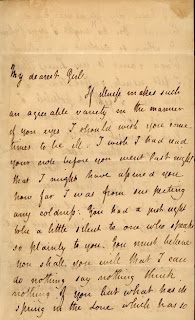 And the most fun; the original animals of Winnie the Pooh! They are all on display, causing what I can only imagine is a HUGE furore over the pond in England, given A.A. Milne was English. 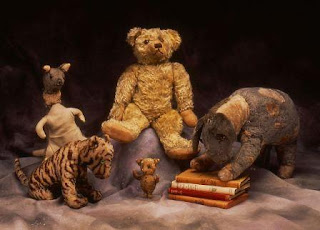 That is an amazing place. I have recently read a book set there - Lethal Legacy by Linda Fairstein, which is a crime thriller but v interesting about this library.

The map room is the one I love.

Don't know that book, but will definitely now read! Thanks!