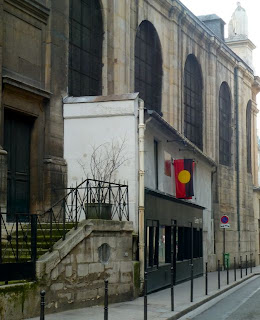 I was in Paris last week. I went for an early morning weekend stroll through the first arrondissement and was suddenly struck by a familiar but disconnected sight. Was that really the Aboriginal flag flying in a Parisian street? What on earth is it doing there?!

It turns out it belongs to Gallery Yapa, at number 18 rue Saint Roch near the Tuileries. It is apparently one of a handful of galleries that specializes in indigenous Australian art for well-heeled parisians.

I've always believed that everything looks better for some reason in Paris. But in this case, I think the red, black and yellow somehow looks more at home in the aussie outback.
Posted by Aussie New Yorker at 7:18 AM