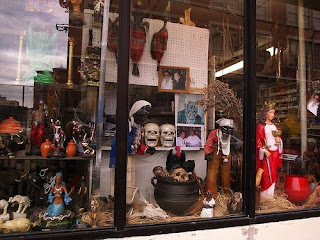 If crucifixes or menorahs aren't your thing, head to East Harlem to partake in the ancient Santeria rituals of the Caribbean. I happened upon one of the most famous "botanicas" on 104th St. It has been providing spiritual advice and religious artifacts for those practicing santeria since 1930.

The origins of Santeria stem from the african slaves who were sent to Cuba, Haiti and the Dominican Republic to work in the sugar fields. It is a mixture of the Yoruba beliefs and traditions from South West Africa, with Roman Catholic elements. Some of these slaves were babalawos or high priests who were denied their rituals in the new world and forced to embrace Catholicism. But they continued to worship their Orishas or black gods by disguising them inside Catholic saints.

There are a number of different items used for worship in Santeria; beads, herbs, statues of saints and animals. Animal sacrifice is a large part of Santeria. Who can forget that scene from the film Angel Heart with Lisa Bonet and the chicken? 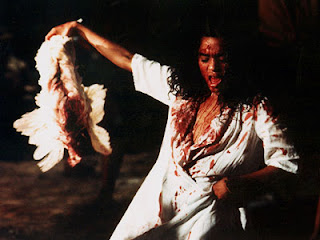 Judging by the number of "Botanicas" in Spanish Harlem, Santeria is alive and well in New York. In fact, apparently the park rangers of Inwood Hill Park (located at the northern most tip of Manhattan) regularly find black garbage bags full of sacrificed animals. I was nervous even entering the Botanica for fear of some evil spirit descending upon me. But it was worth it just to fossick amongst the fantastic shelves of dust-covered goods.
The store is full of voodoo dolls, religious icons, beads, plants, stones and prayer cards. There is "shut up" soap, candles for all occasions, a can of good luck and even "dragon blood" bubble bath. There are tiny bottles of oil that ward off jinxes and offer hope and riches. The owner who has been there for 30 years, can even perform witchcraft for you if you're game..... 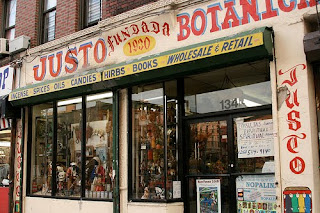 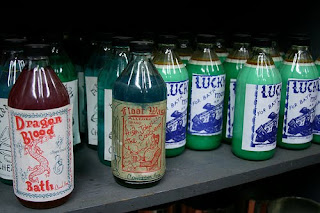 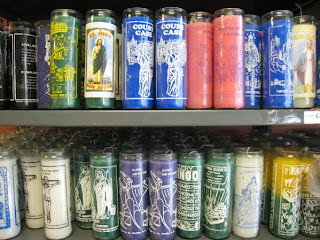 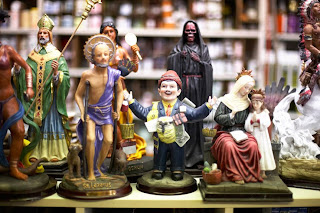