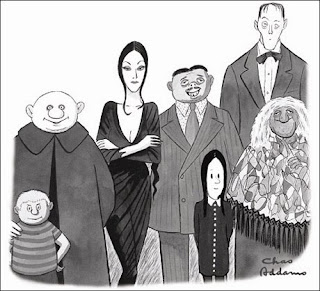 We all grew up on the Addams family TV series. Who can forget "Thing", Uncle Fester and Cousin Itt, to name a few of my favorite characters. I think it was the beautiful Morticia who first made me dream of long, figure-hugging gowns and immaculate makeup. Even though she was always portrayed in black and white, I just know she had a perfect porcelain complexion and wore the deepest, dark, blood red lipstick. They made every real family look so dull in comparison. Why didn't my parents duel with swords before dinner or my grandmother make biscuits with dead lizards as decoration?  The only member of my family who faintly resembled one of the Adamms family was my brother, who was an expert in killing spiders and leaving them in the least expected places.

But did you know this "creepy and kooky" family was born out of years of cartoons for the New Yorker? The characters were in fact created by a Mr Charles Addams who hailed from New Jersey and whose work is now is the subject of an exhibition at the Museum of the City of New York.  Mr Addams was an apparently mild-mannered man with a wickedly macabre sense of humor.  His cartoons - all set in New York - appeared in the New Yorker for over 50 years. His first cartoon ran in 1936 and he continued to contribute more than 1500 works until he died in the eighties. 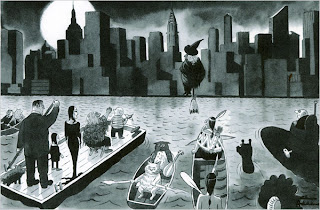 Addams loved to draw in detail the brownstones and skyscrapers of New York. It was against this perfect rendering of a city that the unexpected happened. You have to scan the seemingly normal scene to find the joke, and it was this city of realism that made the joke all the more jarring. Whether it is a milk truck parked in Brooklyn that has an udder, or a bitter housewife in a department store asking for "blunt instruments", or an Indian on a shrink's couch being told his neurosis stems from resentment for his ancestors selling Manhattan for $24, we enter a subversive and comical view of the city where one cringes whilst laughing out loud.

The ghoulish Addams family clan started appearing as anonymous characters moving through the New York cityscape in 1938. Readers clamored for more of the weird family and the editor of the New Yorker encouraged Addams to explore the "tasty little household" further. Addams used his family to turn the ideal of the nuclear family of the 40's and 50's on its head. 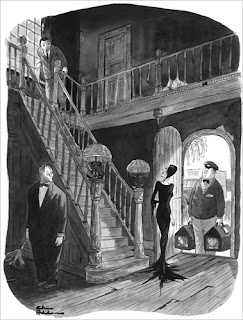 "It's the children darling, back from camp" 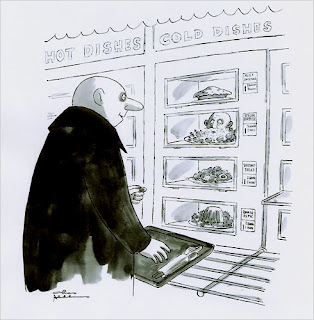 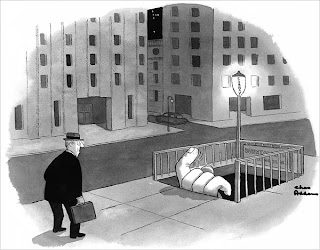 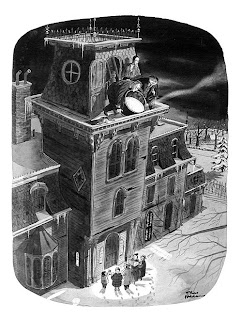 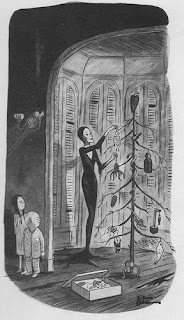 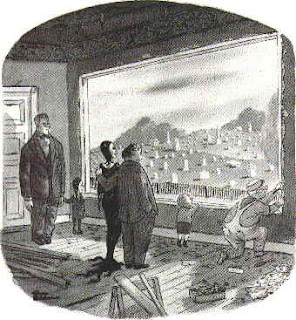 By 1964 the Addams family was so popular they were immortalized in that wonderful 1964 TV series that never dates. Unfortunately for New Yorker readers, the editor thought this was far too commercial, so the family ended their residence in print until two decades later. Luckily for us, the Museum of the City of New York has been collecting these cartoons for years, so we can enjoy Addams' perverse world again for a short time. And for those who like to click their fingers....