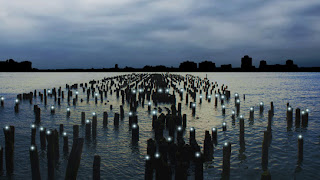 The stars are the jewel of the night and perchance surpass anything which day has to show.
- Henry David Thoreau
Did you know that according to the US Parks Association, by 2020, only 10% of the American continent will be able to view the night sky because of all the city lights? New York of course lost this ability years ago. So it is only fitting that this light pollution issue is illuminated (pun intended) in this city through a very snazzy installation called "Reflecting the Stars".  The Windmill Factory, a collective of artists, designers, architects, performers and producers have mounted 201 solar powered LED lights on the old wooden remnants of Pier 49 in the Hudson River, in an effort to bring back stargazing to the city. Viewers can push buttons from the shore to light up different constellations on the water that you should be able to see above the city. Rather wonderful concept, don't you agree?
Posted by Aussie New Yorker at 9:29 PM

Hi ANY I'm your newest happy follower. This is a really interesting concept, although the reason behind it is a bit sad! Light pollution is such a scourge. You must really notice the difference at night over there. J x

Hi Jane! Thanks for reading me :). I apologize for my lack of entries recently. Work has got in the way of life. I hope to find a rhythm again soon!