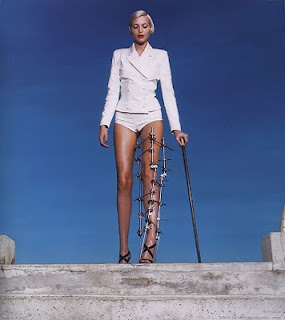 I fractured my big toe last weekend. And no one believed me.  I was surrounded by non believing men, of course, who all said it was just bruised and swollen, so ice it and take a pain killer. But the kicker was they were all medicos! The Anesthetist, a radiologist and a GP and we were all on a boat. It sounds like the beginning of a bad joke, but I was the only one not laughing. And as usual, it was mum who knew best. "Splint it and get it X-rayed," she ordered down the phone. "Don't wait for sympathy from a doctor. You'll be waiting til the next Coming."

Of course,  I did get the last laugh when I victoriously waved the results in front of the anesthetist's nose on Tuesday. Although, my sense of vindication faltered slightly when, after a flurry of belated and guilty action, the anesthetist got me into a top orthopod in record time who then presented me with my new best friend for the next 6 weeks. I'm a walking fashion disaster. 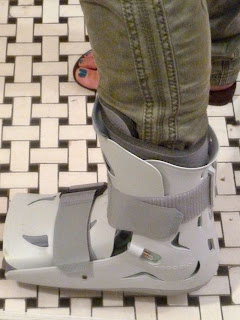 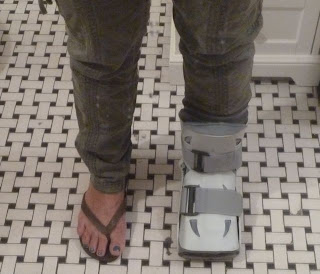 "Do they make these in black?" I whined. "It's an easier color to co-ordinate." I didn't even get a response. Just an arched eyebrow (a blonde, bushy one at that). OK. Clearly fashion and medical matters don't belong in the same sentence. But if anyone out there is looking for a new business idea......

My new "friend" demands attention. In fact, you can't miss him as can be seen from the photos above. Apart from his glaring visibility, the sound of his dull thud on the pavement suggests a one-legged mummy is coming to attack you. But the surprising part of this ordeal has been the kindness shared by fellow New Yorkers! Who said New Yorkers don't care? One lovely man gave up his much coveted cab for me. Another very good looking younger man asked a stranger to give me their seat on the subway. I have random conversations with other men whilst waiting at the pedestrian lights. The anesthetist better watch out. Men can have their dogs to use as a chick magnet. Women only need an ugly grey boot!
Posted by Aussie New Yorker at 7:28 PM