Last summer, I had the great pleasure of meeting David and Jane Walentas. David is a big property developer and the owner of the Bridgehampton Polo Club property called Two Trees, and Jane is an ex Clinique art director and restorer of a beautiful carousel, known simply as Jane's carousel. 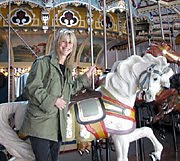 Jane found the dilapidated carousel down in Ohio. Apparently it had been part of an amusement park there for 62 years before the park burned down. Jane purchased it in 1984, and for the past two decades has meticulously restored it to its former glory. The carousel comprises of 48 horses leafed in 24 karat gold and encrusted in jewels, with 2 chariots and 1200 lights. 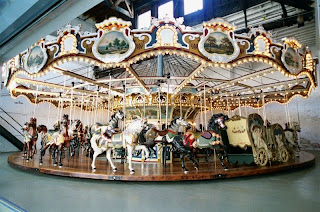 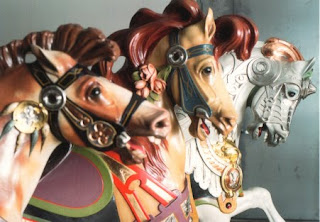 The carousel currently resides in the gallery space of an old warehouse in DUMBO, that super cool, arty enclave just on the other side of the Manhattan Bridge. As an aside, David owns most of the property there and was actually one of the founders of DUMBO. He wanted to make it into an artistic haven close to Manhattan, so rents out prime warehouse space to struggling artists, thus fostering a thriving and affordable artistic community.

At the moment, the carousel is for viewing only, as the space is too small to ride it. However, Jane and David are donating the carousel to DUMBO and have commissioned French architect Jean Nouvel to design a glass pavilion in which to house the carousel.  There are no images yet for what this will look like, but it will be positioned close to the waterfront under the Brooklyn Bridge where "generations of children" who visit the park can enjoy a ride on a impeccably restored pony. 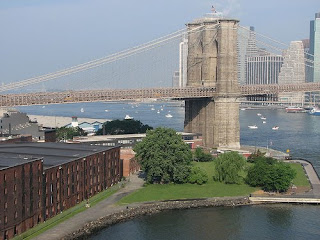